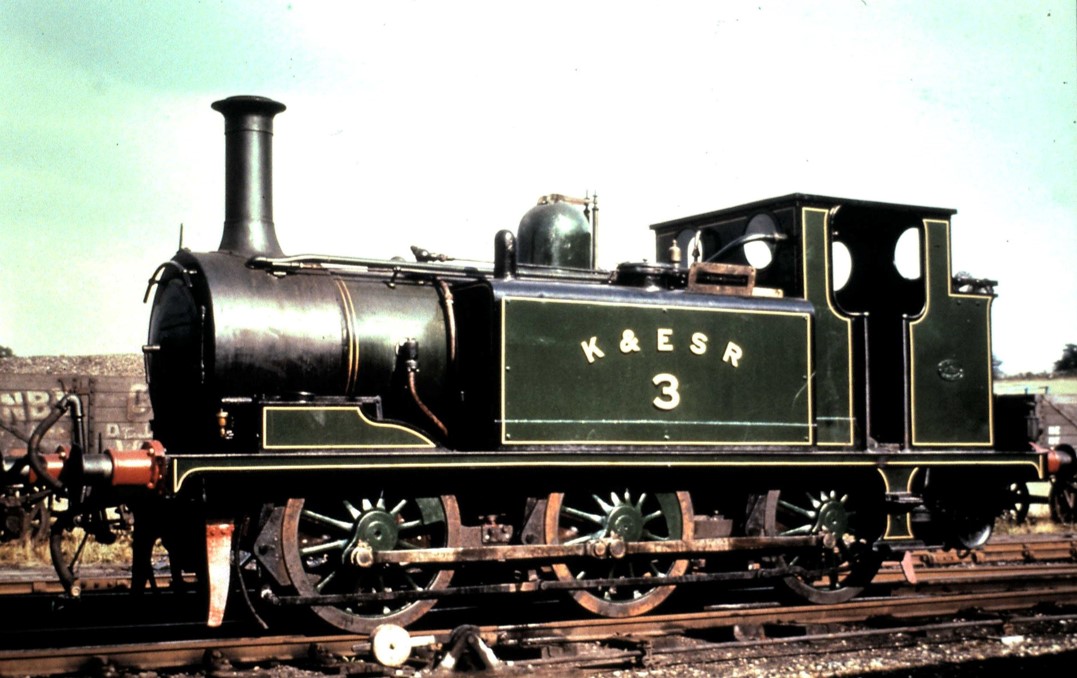 150 Years of History - to be told in steam over the next decade! 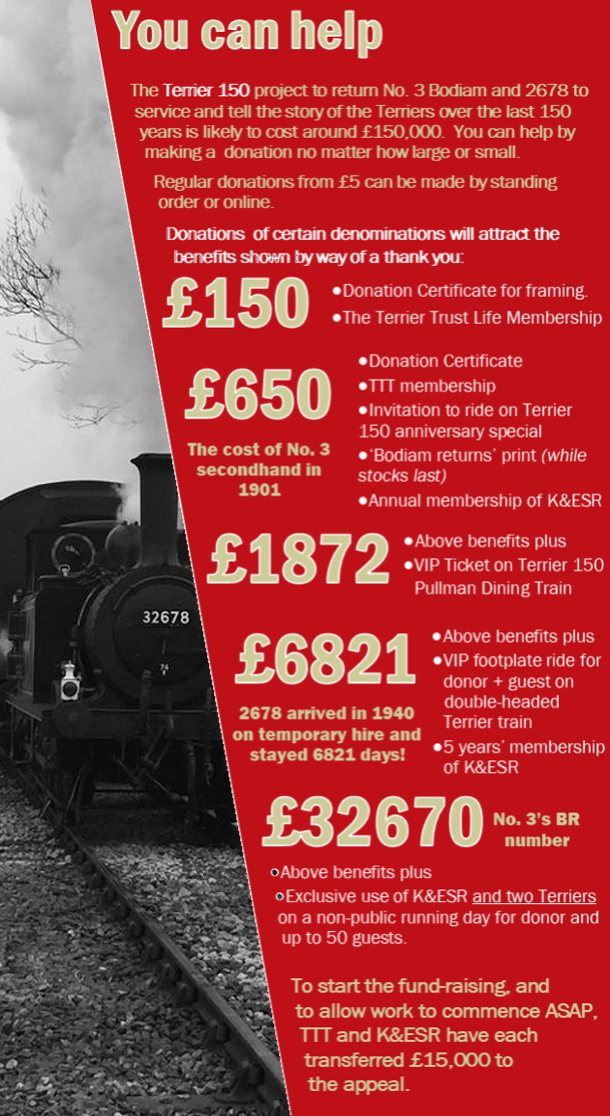 Help raise £150,000 to celebrate a century-and-a-half of Stroudley’s Terriers, tell their story so far and keep them steaming on! 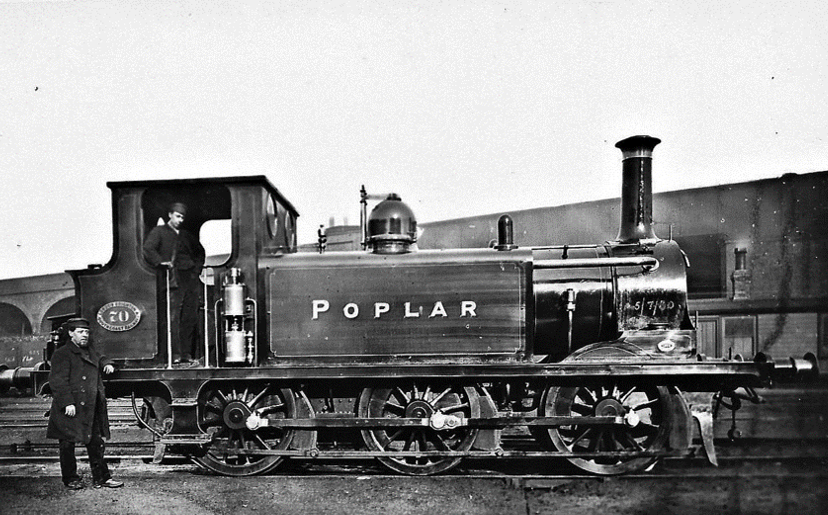 Bodiam, as L&BSCR No. 70 Poplar, was the first of the Terrier Class constructed in 1872 and one of the first batch to enter service so both charities are determined to see her in action for her 150th Birthday.

Terrier 150 is an ambitious programme to not only achieve that, but additionally, to tell the story of the once 50-strong class of diminutive locos, whose longevity and usefulness is legendary. 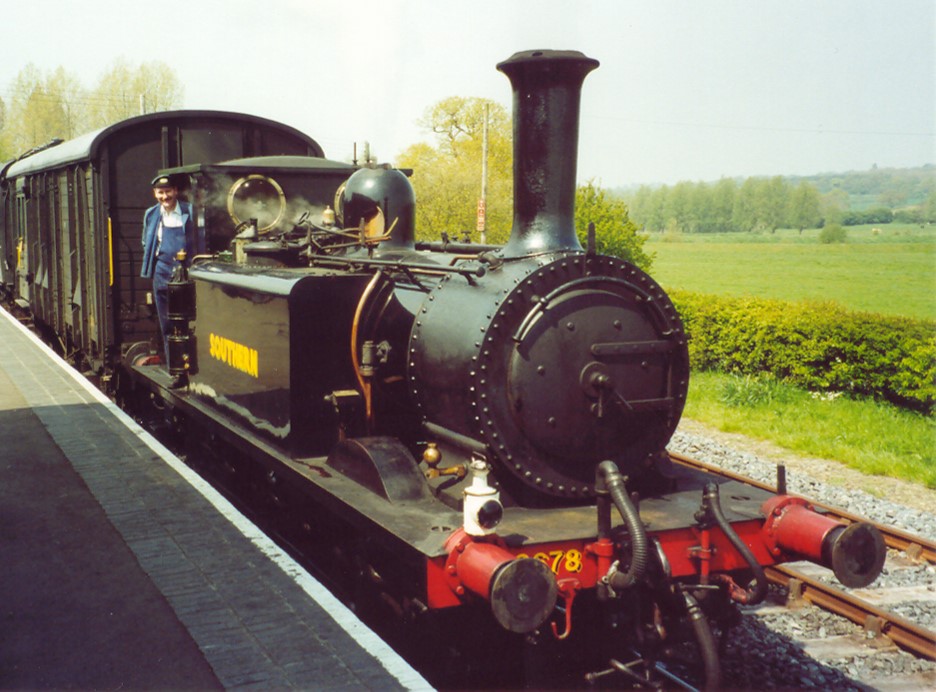 Work on both locomotives will commence in the next few weeks with 2678 expected to re-enter service later this year while Bodiam will be back in action in time to celebrate in 2022.

You can help turn these exciting plans into reality by donating to the Terrier 150 Appeal which aims to raise £150,000, the sum needed to fund the overhauls of both locomotives and enable some almost-forgotten chapters of Terrier history to be recreated.

Terrier 150 will do more than simply mark the 150th anniversary of these magnificent machines, the programme will also show their impact on the K&ESR, other lines once run by Colonel Stephens and railways more generally.

The compact, lightweight, yet powerful design made the Terriers particularly useful and versatile. This led to them being used in numerous locations, for a variety of purposes and for many years after they were deposed from their original duties. Remarkably 10 have survived into preservation, including the 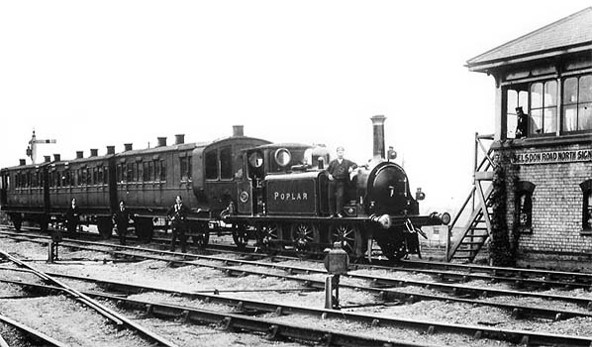 Over the course of the next few years, several milestones in No. 3’s unique history will be remembered. These include:

1901 - 1930s Purchased by the Rother Valley Railway (later K&ESR), renamed No. 3 “Bodiam” becoming a regular performer on K&ESR throughout the line’s busiest years 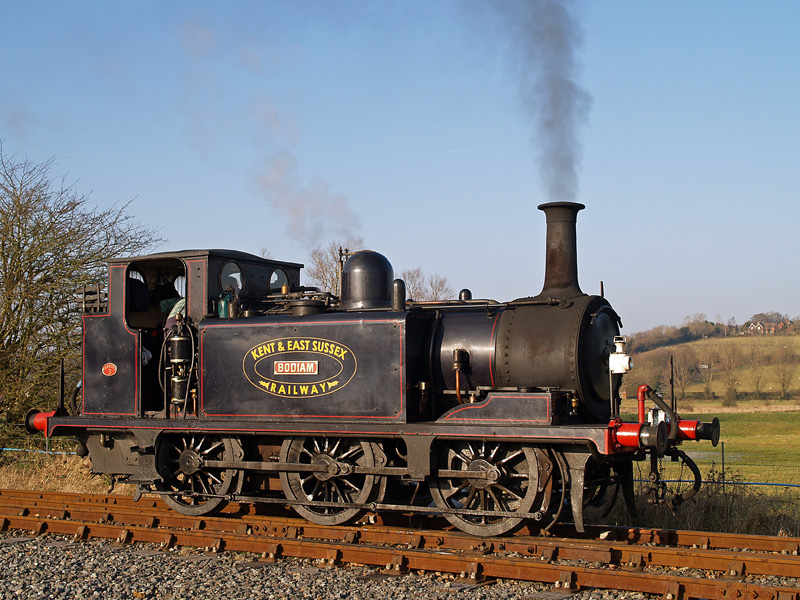 1947 - 1954 Thoroughly overhauled at Brighton and painted in K&ESR dark green, a livery she carried under BR until the line closed to passengers in 1954!

1954 - 1963 Used on goods services and specials on K&ESR, and then on the Hayling Island Branch that was run exclusively by Terriers!

1963 Saved for preservation and returned to K&ESR

Plans for this loco, which started life in 1880 as LB&SCR No. 78 Knowle include recreating highlights from her history, such as: 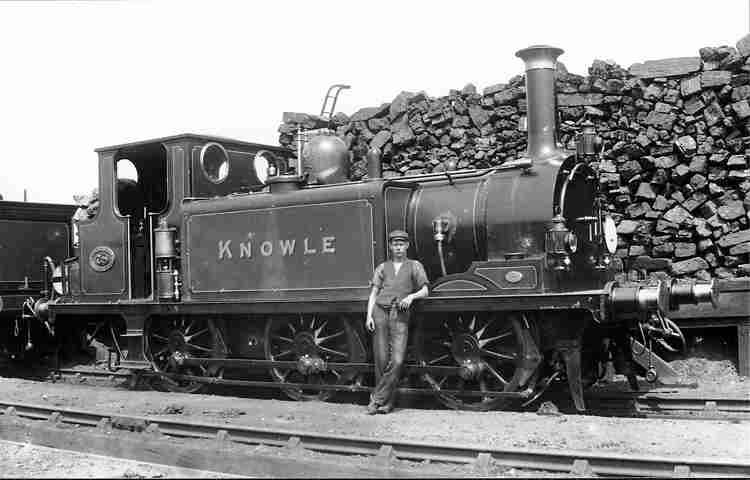 to 18 Oct 1958 In BR black, she continued as a K&ESR stalwart before being transferred to Hayling

2678 will also conjure up memories of members of the class that did not survive, creating contemporary scenes based on those Terriers in action through the ages. Possibilities include:

No. 42 Tulsehill Locomotive Department shed pilot at Battersea in 1919

SMR No. 8 One of several Terriers purchased by Colonel Stephens, No 8 Dido ran on the Shropshire & Montgomeryshire Railway until the late 1930s. In 1941, her tanks were sold for use on No. 3

EHLR No. 1 One of the pair Terriers purchased for the ill-fated Edge Hill Light Railway in Warwickshire 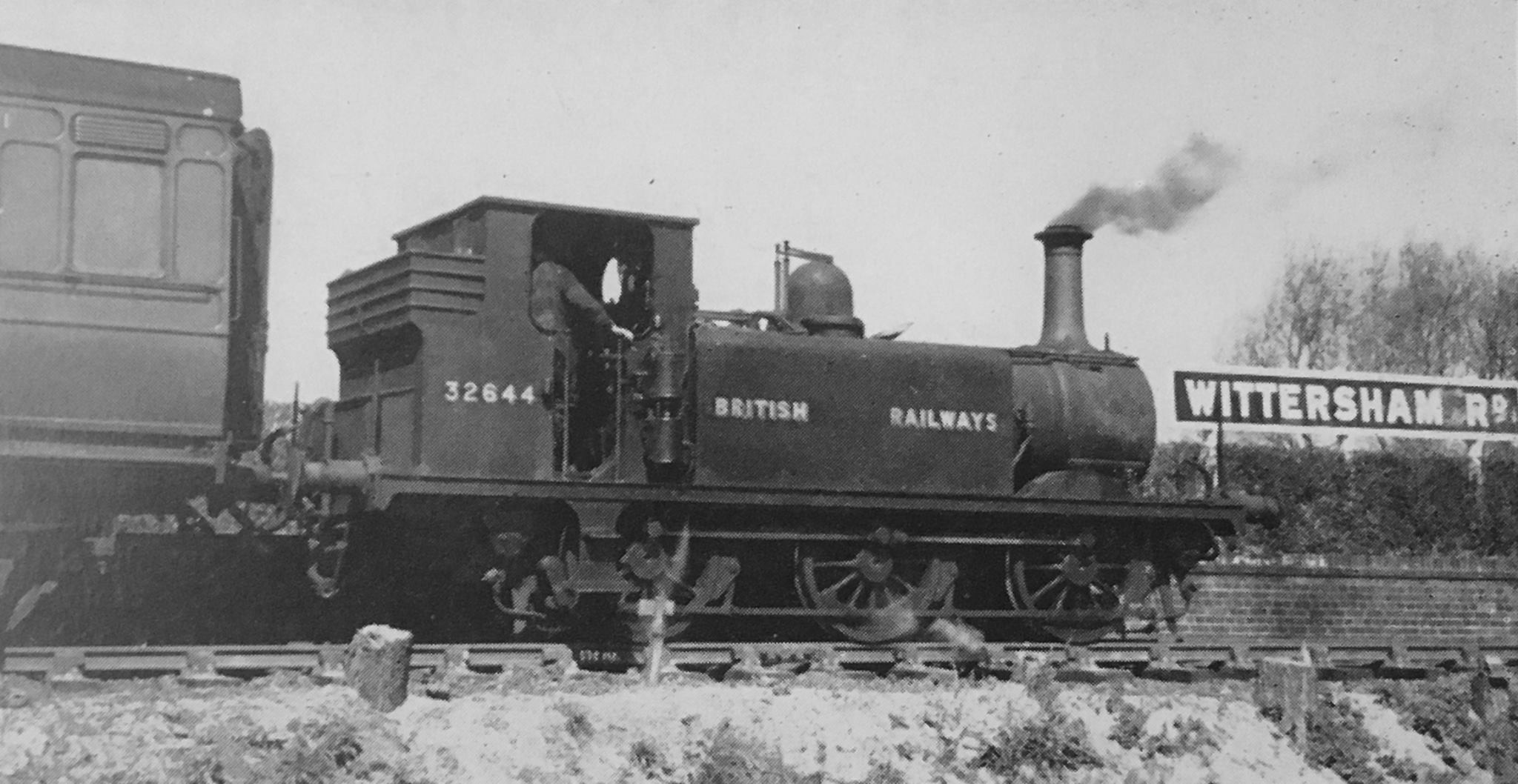 WC&PR Nos. 2 and 4 The Weston, Clevedon & Portishead Railway bought two Terriers. When the line closed in 1940, the pair became the only Terriers owned by the Great Western Railway 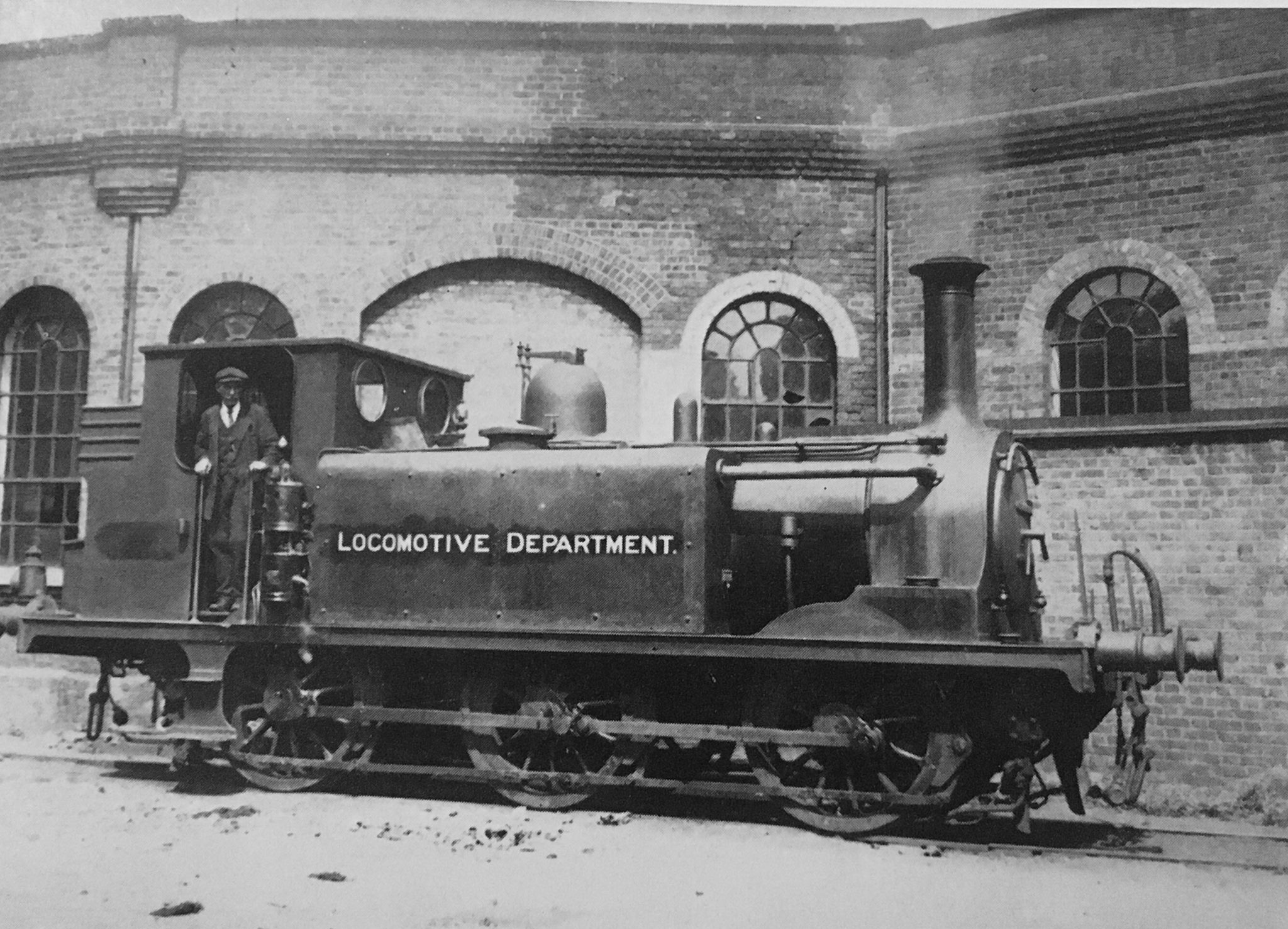 If you are a UK taxpayer and donate using Gift Aid, the K&ESR can claim 25p from the Government to add to the appeal for every £1 you donate!

The Terrier 150 appeal and programme is organised jointly by: 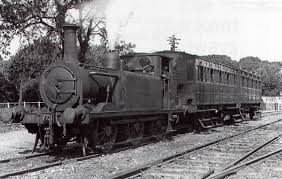 More information on No. 3 Bodiam 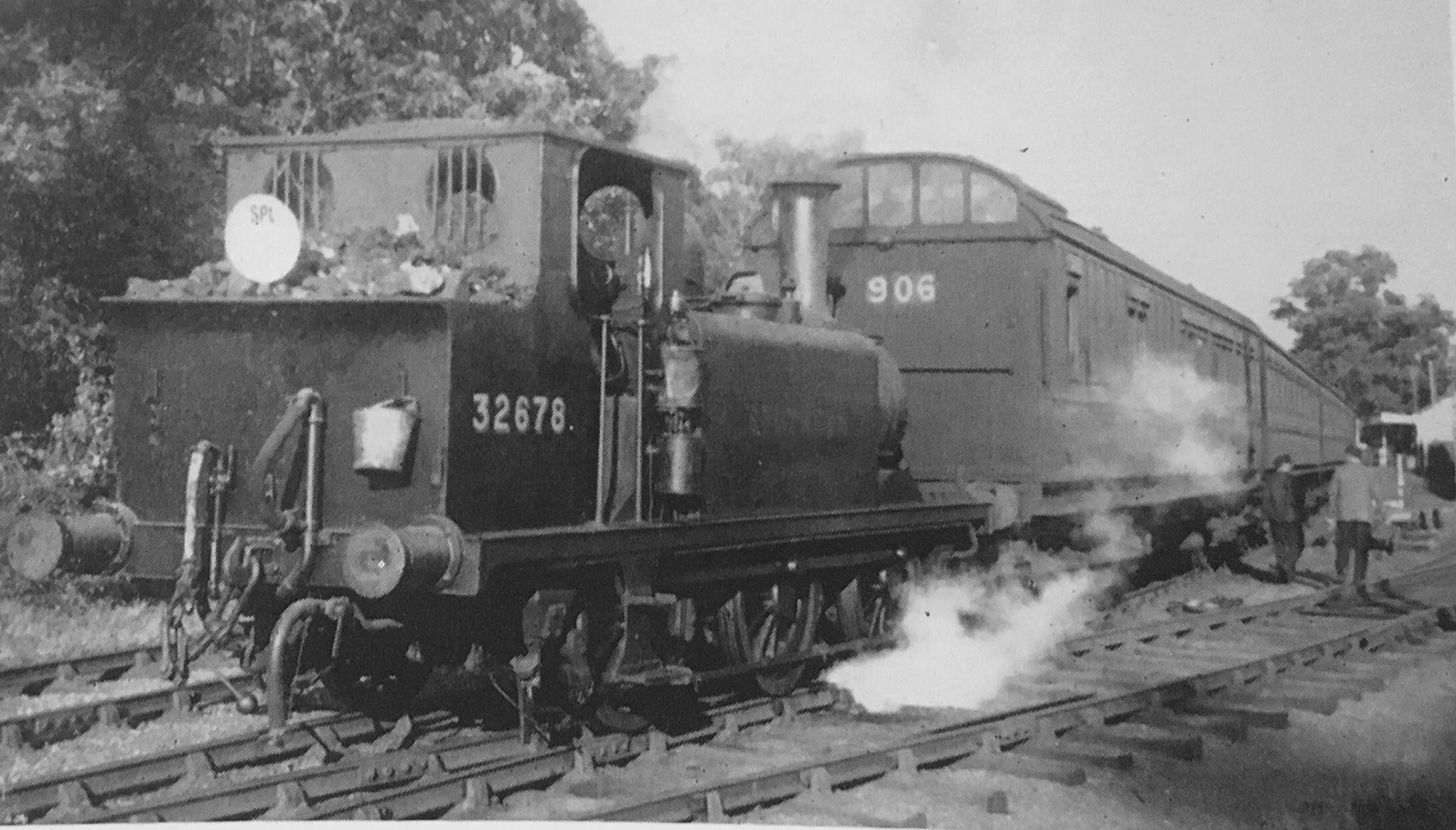 March 2020: During the current restrictions to combat Coronavirus, it may take longerthan usual to acknowledge donations and to arrange the benefits shown above.  Contributions are nevertheless still very welcome, and very much needed, to ensure No. 3 is back in action for 2022. 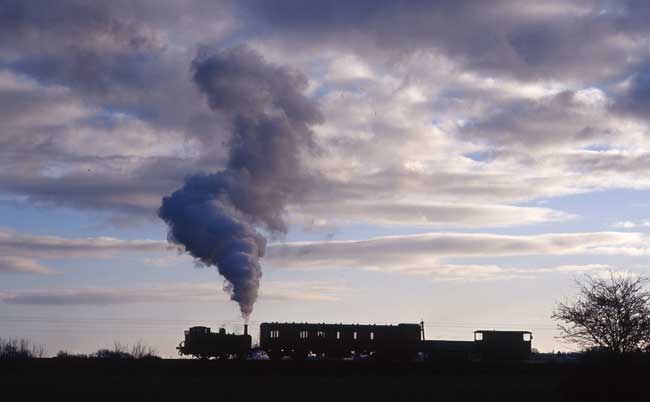