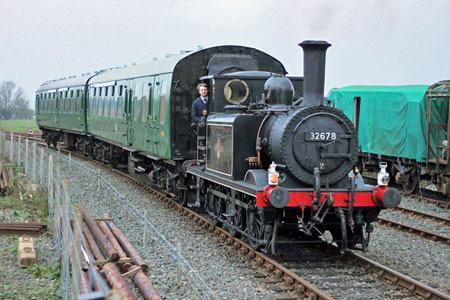 75 years ago to the day this coming Sunday, on Thursday 15th February 1940, a third Terrier was loaned to the K&ESR by the Southern Railway in the space of a little more than two years. In the depths of one of the harshest winters on the 20th century the occasion would have been but little noticed as the ramifications of war took greater hold. Approaching 60, and to all intents even then a pensioner, this simple event for 2678 triggered a remarkable relationship that in own way and in its own right, is as charming, endearing and as distinctive as the line’s association with No.3 Bodiam.

P-class 1556, itself a locomotive with strong K&ESR associations, had been the very first hired by the Southern to the K&ESR from 4th November to 22nd December 1936. She returned just over a year later, on New Year’s Day 1938, being joined by the first Terrier hireling, 2655 Stepney, on 28th August 1938. 1556 left the K&ESR a month later, 29th September, being replaced by the physical presence of No.3334, of the same class ‘0330’ as K&ESR No.4 – this was singularly unsuccessful and may have contributed to 2655’s extended, and perhaps longer than originally intended, sojourn to the 20th October 1939 when she was replaced by a second Terrier, 2659 Cheam. 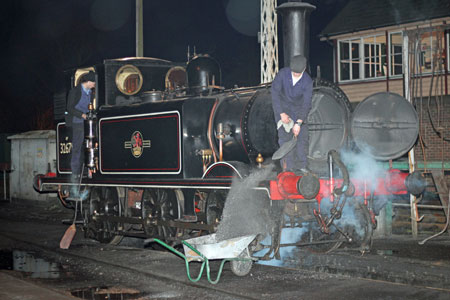 From the K&ESR Mileage Register it may be deduced that the reason for the additional hire was the teetering condition of No.4, and, but only marginally less so, the fragile state of No.3 that had restricted her to but occasional outings for some three weeks prior to the arrival of 2678. In that period No.4 essentially managed to keep the Headcorn traffic moving whilst Cheam operated the Robertsbridge section.

Once 2678 had settled in, No.4 was withdrawn leaving the two guest Terriers to essentially keep the railway running. With No.3 only making guest appearances in traffic when circumstances dictated, the two engines rarely missed a beat, or at least a day in traffic until 2678 had to be withdrawn for repair on 12th August, immediately before the Luftwaffe launched Adler Tag. Somehow the other two Terriers managed to keep the service going until relief of sorts arrived in the form of ex-L&SWR ‘0395’ 0-6-0 No.3440, that worked in on 24th August. Thankfully, though, 2678 was back in action from 2nd September.

It is a tribute to the design, evolution and reliability of the Terriers that ensured the K&ESR kept going throughout this perilous phase of our nation’s history, including doing its bit and more throughout the entire Dunkirk Evacuation (Operation Dynamo). Indeed, Knowle and Cheam worked every day of the crisis, except on Sunday 26th May when Bodiam operated the only train of the day, a War Office Special from Tenterden Town to Headcorn.

2678 kept its working association on the K&ESR for the remainder of the war, other than for necessary repair and service to first the end of the war, then the end of the independent existence of the railway, and then up to and including closure to passenger traffic. Finally in 1958 she participated on two specials – The Branch Line Society Special on 12th April, with Fenchurch, and the LCGB Special, The Rother Valley Limited, on 19th October, with Morden.

It is true that throughout their careers, both on the K&ESR and on the wider network, the Terriers have had moments of great success as well as some very dark days. But their value and importance to locomotive engineering can never be dulled or diminished. Years ago I drew parallels with the relevance to the Supermarine Spitfire in the history of aviation and I have no intention of rescinding that link. For on the 75th anniversary of our country’s darkest year of the 20th century it is only right and proper that we should celebrate and give thanks for their contributions to the war effort and the relative peace and prosperity we take too readily for granted.