You are here: Home » News » Exciting Plans for 2018 as Trust Secures New, Long-term Agreements with K&ESR 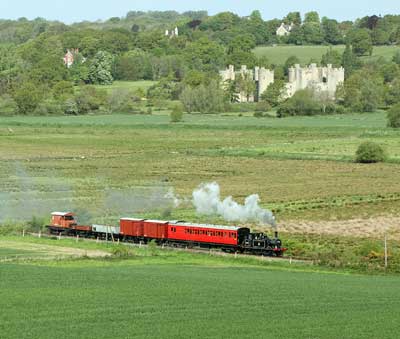 Following lengthy negotiations, the Trust has concluded new agreements with the Kent & East Sussex Railway for both No 3 “Bodiam”(32670) and No 32678. The arrangements which were ratified on Saturday 18th November secure the long-term future of both Terriers and will ensure that both will continue to be a feature of the line on which they have operated since 1901 and 1940 respectively.

Key features of the new agreements are the increased term (initially 20 years with an automatic renewal every 10 years) and a longer break clause – 10 years in the new agreements compared to just year in the old ones. This will provide additional security for the K&ESR who will remain responsible for maintenance and overhauls allowing them to invest in caring for the Trust’s locomotives, safe in the knowledge that they will see the benefit of that expenditure.

Under the contracts the K&ESR has also committed using their best endeavours to ensure at least one Terrier is available for traffic at all times – reaffirming long-standing K&ESR policy – and to ensuring that the Trust’s Terriers are used to haul public passenger trains on at least 20 days each year. This will help ensure the Trust meets it charitable objects of having the locos available for public display and demonstration.

There are exciting plans for both locomotives in 2018 starting with the Colonel Stephens 150 weekend at which it is planned to No 32670 on static display while 32678 will be working trains in the guise of one of the long-lost Terriers purchased by the Colonel for another of his idiosyncratic railways. The event will also see the reintroduction of another regular feature of the Stephens’ empire – “The Mixed”. The unusual trains, combining passenger and goods workings into one train as a cost saving measure, will be recreated on three off-peak Saturdays – 12 May, 9 June and 9 October – the last date providing extra enthusiast interest at the Austin Counties Car Rally. 32678 will also feature at the popular Hoppers Weekend on 8 and 9 September.

Early July weekends see 32678 scheduled to haul the K&ESR’s train of magnificent vintage carriages and there is also the possibility that the engine will visit other heritage lines to generate additional revenue or as part of reciprocal arrangements that see visiting locomotives augment the K&ESR fleet for key periods or special events. Such loans, which have not been possible since 2008, are facilitated by improved provisions around insurance cover and documentation included in the new agreements. As well as the clear benefits to the K&ESR, visits will assist with the Trust’s objectives around education and access to a wide public.

Although out of service, there’s also a possibility that 32670 will have a spell away from the K&ESR this Summer, as a static exhibit at the Kent County Show in July. The railway’s commercial team are checking that transport will be affordable and if so the diminutive loco will be the centre-piece of the railways display at the popular festival.

With the locomotive’s 150th anniversary just 4 years away, discussions have also started on how to ensure that she is back in steam for that momentous occasion.

The new agreements are also a major step in the conversion of The Terrier Trust to a Charitable Incorporated Organisation. The locomotives were transferred to the CIO simultaneously with signing of the new agreements, bank accounts and all other assets were transferred in January and the old Trust closed – the remaining formalities will take place at the Trust’s AGM on 14th July.

With so much going on, the Trust is looking for new members – life membership starts at £150 and payment can be spread over 10 months