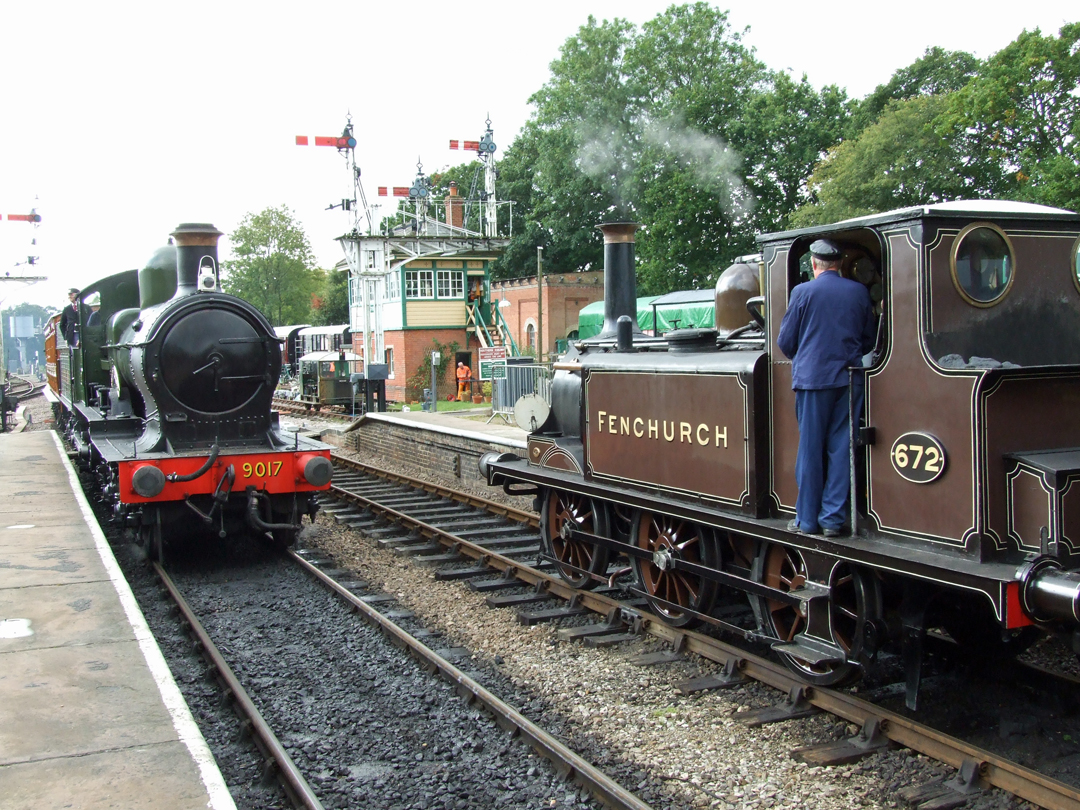 Who Let the Dogs Out?

Visitors to Bluebell on Saturday 29th September 2007 had a real treat thanks to a departure from the scheduled locomotive roster. Whilst Dukedog 9017 “Earl of Berkeley” served as expected on the B-set/vintage train, it was a stirring sight to discover that West Country 21C123 “Blackmoor Vale” was being used on the primary formation, working the 11.00am, 1.00pm, 3.00pm and 4.47pm departures from Sheffield Park

Like oh so many stations on heritage lines up and down country that have lost their terminus status as enterprises have extended, Horsted Keynes now shows little of the bustle that was such hallmark in earlier preservation days. There always used to be something happening at the station especially when the two-by-two service operated with a second train off Sheffield Park used to leave immediately the first reached Horsted Keynes. This pattern was then mimicked in the Down direction before being repeated

A bit like Northiam on the K&ESR the station only seems to genuinely come to life on busier days such as Sundays when the “Golden Arrow” Pullman train is working, but thankfully there is an alternative on many Saturdays when a small engine is used on Footplate Way and Works days, otherwise known as RXD or Railway Experience Days. So it was an additional treat to discover that the rostered engine for this service was none other than “Fenchurch”, the original Terrier, in its pseudo A1 condition with fictitious number 672

Although the forecast had hardly been promising, Horsted Keynes station was treated to some beautiful autumnal sunshine in the morning that showed the 1872 relic off to its finest in its Marsh livery but with “Fenchurch” on its side tanks rather than the letters L B S C as currently worn by “Martello”

Hauling a SECR brake conveying the participants on the course between turns on the footplate, “Fenchurch” made a succession of runs out of Platform 2 towards the north end of the station, presenting a few opportunities to be photographed with passing service trains

The accompanying picture shows “Fenchurch” preparing to propel the brake van out of the immediate area of Platform 2 whilst “Earl of Berkeley” runs into Platform 3 working the 12.00 noon train from Sheffield Park to Kingscote.

A detailed history of Fenchurch can be found on the Bluebell Railway's website.