You are here: Home » Archive » Trust's Locos in Regular Service for 2015 Season 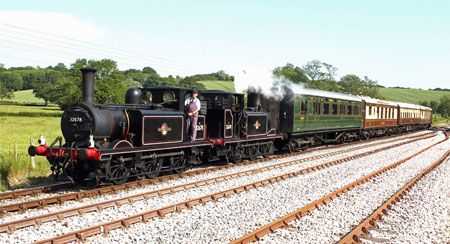 There is a certain irony with increased used of the Terriers throughout 2015 that disproportionally paradoxically it is much more difficult to write updates on what Terriers are doing as they performance has been routine rather than an event...

In many respects this is a good thing and was it to carry on for any length of time it would be tempting to dive into the record books...32678 was 88000 short of 1.5 million on withdrawal from BR service. We might need to look at her K&ESR mileage soon. 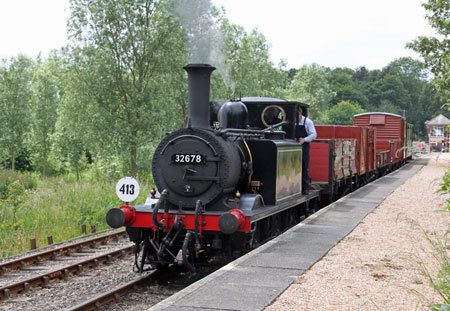 The upside is that for once the Terriers have been doing what they were designed to do: be used. This has not come without a cost. The lubricator had to be changed recently on 32670 and there was an issue with the air brake pump, whilst significant repairs will be needed to the smokebox area on 32678 during the closed season.

A feature of Terrier operation has been occasional use double-heading the “Wealden Pullman”; a sight not enjoyed since the mid-1980s on a regular basis when No.10 “Sutton” (LB&SCR No.50 “Whitechapel”) were often worked in multiple.

Talking of “Whitechapel-Sutton” – a bit of a mouthful – TTT CIO member John Wickham visited Tunbridge Wells West in mid June. Work is progressing; witness the new finished cylinder block, but the challenge of the boiler still lies ahead.

75 years ago, the wartime working on the K&ESR effectively split the line into two completely separate sections, as can be seen from the emergency timetable on display in the award-winning Museum at Tenterden Town. Freakily this meant that when 32678 worked three round trips during the Real Ale and Cider Festival she actually mimicked the same pattern of operation on the same date in 1940, albeit only as far as Bodiam.

Rumours that Matt Hyner wants to have his name painted inside one of the cabs of a K&ESR engine due to the number of turns he has been doing are totally unsubstantiated, but the multi-tasking Terriers have continued to be called on for a variety of demands, excluding scheduled haulage of the Vintage train on the B-set.

Bonus delights have seen 32678 pressed into Hayling Billy service to replace the DMMU once more, rather than mainly with the Vintage train as happened during weekdays in the Easter holidays, although it was a pity that the repainted pram van could not also be accommodated in the formation.

Pete Lamont, another TTT CIO member, was fortunately also on hand when Operating Assistant Andy Hardy took his driving test during the summer, obtaining a number of interesting and unusual views.