You are here: Home » Archive » Cricket Stops Play! - History with an Exclamation Mark as “Bodiam” returns to Robertsbridge

Cricket Stops Play! - History with an Exclamation Mark as “Bodiam” returns to Robertsbridge 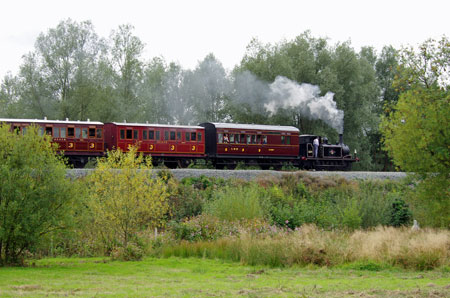 It should have been set for a scene straight out of the inspirational Ealing comedy film, “The Titfield Thunderbolt”.

A Victorian steam engine with three four-wheeler coaches puffing past a cricket match on a re-opened piece of railway track; the distracted batsman theatrically “bowled” and then everyone rushing over to the boundary fence to cheer the intrepid 1872 veteran.

Instead train operations were held up briefly in the style of an “Oh Mr Porter” farcical scene, not by a pompous stationmaster at Buggleskelly but by efforts to locate and return the match ball – misshapen as it undoubtedly was – smote clean over boundary and railway fence by Seaford cricketer John Smith in his brief cameo innings at Robertsbridge on September 21st. 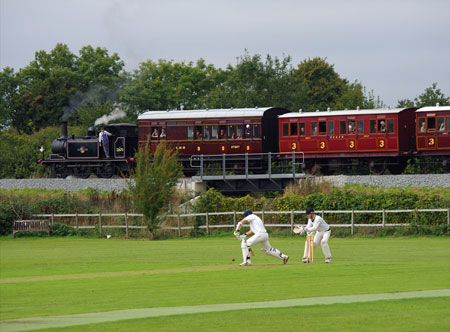 Perhaps it was fortunate the first day of public trains on the revived section of the Rother Valley Railway (RVR), run to the K&ESR rulebook with K&ESR stock and operating crew was not situated next to a baseball ground, for an equally well hit home run would have probably carried railway and river onto land adjacent to the former Hodson’s Mill!

And yet in a way the weekend was a sort of straight six; a home run over center field. Nothing proven, nothing concluded – just a dramatic event no-one dreamed possible perhaps as recently as five years ago. But it happened.

For the star of the show, Terrier K&ESR No.3 “Bodiam” as BR 32670, it was very much “History with an Exclamation Mark”; symbolising the latest innings in an a remarkable career.

In spite of hiccups with the air brake pump and the cricketing interruption, she managed something like 24 round trips over the half mile of track that includes five overbridges on Saturday alone.

In the words of one younger volunteer: “I would think anyone going down (to Robertsbridge) this weekend would be impressed. Just to see “Bodiam” and a mainline train (375 Electrostar) at the same time seems so strange.”

So much will be said, written, read, and analysed about the Return to Robertsbridge over the coming weeks and months, but at least for the moment let’s just stop and recall the happy faces, young (six weeks in one case) and old; staff, supporters and most importantly the visitors, who rekindled an atmosphere possibly not witnessed in context since “Bodiam’s” Centenary in 1972, prior to re-opening of the first stage of the K&ESR in 1974.

Eschewing the temptation to use Churchillian phraseology such as “The End of the Beginning” as far as the RVR project is concerned, Return to Robertsbridge has brought into sharp focus the challenge of how to add about another third to the K&ESR existing mileage along with all the disproportionate additional associated costs before the railway even earns a penny towards reinvestment and ongoing capital costs.

Robertsbridge itself with its attractive architecture, delightful walks and some sort of cricket tie-in with Gray Nicholls offers the prospect of some mutual benefit, but as Seaford (a town itself with historic Terrier connections) showed in the Intersport of Lewes Plate Final, a six in itself does not an innings make. Dismissed for 136 in 34, their opponents chased down the victory target in their 34th for the loss of three wickets.